What if - trams actually turned into rhinos?

Anyone who has spent enough time in Melbourne would have caught a tram and would have probably seen this poster: 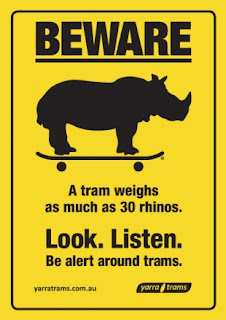 It is a warning on the how dangerous it could be to be hit by a tram published in the interests of passenger safety by Yarra Trams.

My brain did a bit of a wobble and came up with this question:

"What would happen if magically each of the trams in Melbourne were to turn into 30 actual rhinos?"

The numbers worldwide of rhinos are scary. They are so close to being extinct so lets quickly look at them:

So if 1 Melbourne tram turned into 30 rhinos.... it would only take 2 trams for Melbourne to have half of all the Javan Rhinos in the entire world.

It would take 10 trams to turn into 30 rhinos each for Melbourne to have as many Sumatran Rhinos as there are in the world.

It would take only about 120 trams for Melbourne to have as many Black Rhinos as there are in the world.  Poachers have killed about 500  trams worth of rhinos recently leaving us with only 120.

There are about 466 trams worth of White Rhinos left in the world.

Yarra Trams have a rolling stock (according to Wikipedia) of 487. So if each of these had to change into 30 real rhinos that would leave Melbourne with 14610 rhinos.

The population of Rhinos would almost double! That is how few of these iconic and beautiful animals are left.

Also, depending on which type of rhino the trams turn into would probably determine how the city itself would react.

White rhinos are pretty relaxed ("no worries") and would generally just stroll around looking for some grass to eat like some large, grey, horned cows. They would do this in herds of about 15 - so a tram would yield 2 herds.

If the trams turned into Black Rhinos then Melbourne would have a bit of a problem. It would have a quarter of all Black rhinos in the world which would be an amazing thing for conserving this magnificent beast (if only!) but these are very angry and aggressive animals. They will charge for no reason and they can show what their horn can be used for (not decoration or medicine). They are also territorial and will fight each other. They can also run at speeds of about 50Km/h. On top of all of this - the city would be impossible to get out of because the roads would be blocked by huge beasts, there would be no trams, and walking and cycling would be dangerous.

But at least the people of Melbourne would be privileged  to see this beautiful beast before it is relegated to zoos or killed off totally. 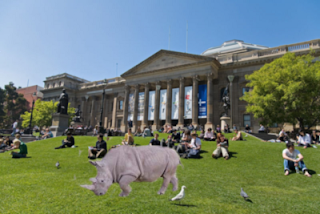 White Rhino just chilling at the State Library of Victoria

(hat tip to http://what-if.xkcd.com/ for making me think strange thoughts)